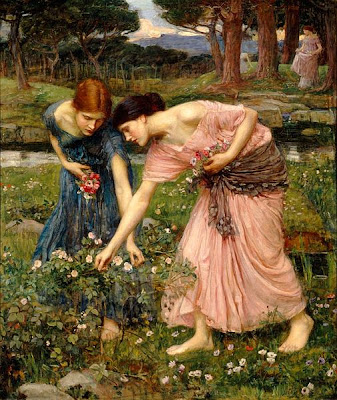 To the Virgins, to Make Much of Time

And this same flower that smiles to-day
To-morrow will be dying*.

The glorious lamp of heaven, the sun,
The higher he's a-getting,

The sooner will his race be run,
And nearer he's to setting.

That age is best which is the first,
When youth and blood are warmer;

But being spent, the worse, and worst
Times still succeed the former.

Then be not coy, but use your time,
And while ye may, go marry:

For having lost but once your prime,
You may for ever tarry.

*note - The orgasm has been widely represented in the literature over the centuries. In antiquity, Latin literature addressed the subject as much as Greek literature: Book III of Ovid's Metamorphoses retells a discussion between Jove and Juno, in which the former states: "The sense of pleasure in the male is far / More dull and dead, than what you females share." Juno rejects this thought; they agree to ask the opinion of Tiresias ("who had known Venus/Love in both ways," having lived seven years as a female). Tiresias offends Juno by agreeing with Jove, and she strikes him blind on the spot (Jove lessens the blow by giving Tiresias the gift of foresight, and a long life). Earlier, in the Ars Amatoria, Ovid states that he abhors sexual intercourse that fails to complete both partners.

The theme of orgasm survived during Romanticism and Homoeroticism. Percy Bysshe Shelley (1792–1822), "a translator of extraordinary range and versatility", in FRAGMENT: Supposed to be an Epithalamium of Francis Ravaillac and Charlotte Cordé, wrote phrase "No life can equal such a death.", that has been seen as a metaphor for orgasm, and that was preceded by a rhythmic urgency of the previous lines "Suck on, suck on, I glow, I glow!", alluding explicitly to fellatio. For Shelley, orgasm was "the almost involuntary consequences of a state of abandonment in the society of a person of surpassing attractions." Edward Ellerker Williams, the last love of Shelley's life, was remembered by the poet in "The Boat on the Serchio", which is seen as probably "the grandest portrayal of orgasm in literature":

The Serchio, twisting forth
Between the marble barriers which it clove
At Ripafratta, leads through the dread chasm
The wave that died the death which lovers love,
Living in what it sought; as if this spasm
Had not yet passed, the toppling mountains cling,
But the clear stream in full enthusiasm
Pours itself on the plain....
Again, Shelley, in this poem, related death to orgasm when he writes "death which lovers love". Curiously, in French literature, the term la petite mort (the little death) is a famous euphemism for orgasm; it is the representation of man who forgets himself and the world during orgasm. Jorge Luis Borges, in the same vision, wrote in one of the several footnotes of "Tlön, Uqbar, Orbis Tertius" that one of the churches of Tlön claims Platonically that "All men, in the vertiginous moment of coitus, are the same man. All men who repeat a line from Shakespeare are William Shakespeare." Shakespeare himself was a knowledgeable of this idea: lines "I will live in thy heart, die in thy lap, and be buried in thy eyes" and "I will die bravely, like a smug bridegroom", said respectively by Benedick in Much Ado About Nothing and by King Lear in the homonymous play, are interpreted as an option to die in a woman's lap to experience a sexual orgasm. Sigmund Freud with his psychoanalytic projects, in "The Ego and the Id" (1923), speculates that sexual satisfaction by orgasm make Eros ("life instinct") exhausted and leaves the field open to Thanatos ("death instinct"), in other words, with orgasm Eros fulfills its mission and gives way to Thanatos. Other modern authors have chosen to represent the orgasm without metaphors. In novel Lady Chatterley's Lover (1928), by D.H.Lawrence, we can find an explicit narrative of a sexual act between a couple: "As he began to move, in the sudden helpless orgasm there awoke in her strange thrills rippling inside her...
Posted by Thersites at 8:24 AM

"The sense of pleasure in the male is far / More dull and dead, than what you females share."

Good to know. Well, for us women, that is.