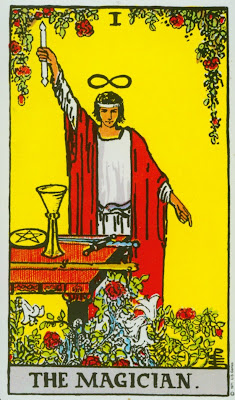 Traveling on his way, the Fool first encounters a Magician. Skillful, self-confident, a powerful magus with the infinite as a halo floating above his head, the Magician mesmerizes the Fool. When asked, the Fool gives over his bundled pack and stick to the Magician. Raising his wand to heaven, pointing his finger to Earth, the Magician calls on all powers. Magically, the cloth of the pack unfolds upon the table, revealing its contents.

To the Fool's eyes, it is as if the Magician has created the future with a word. All the possibilities are laid out, all the directions he can take: The cool, airy Sword of intellect and communication, the fiery Wand of passions and ambition, the overflowing Chalice of love and emotions, the solid Pentacle of work, possessions and body.

With these tools, the Fool can create anything, make anything of his life. But here's the question, did the Magician create the tools, or were they already in the pack? Only the Magician knows - and on this mystery, our eloquent mage refuses to say a word. 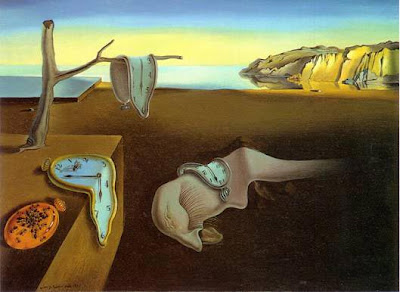 The Death of Man-Made "Absolute" Time and Restoration of the Natural Eternal Feminine?
On the tragic nature of choice and other so-called "veils of ignorance".

It's what Isaiah Berlin termed "the unavoidability of conflicting ends" or, alternatively, the "incommensurability" of values. He once called this "the only truth which I have ever found out for myself... Some of the Great Goods cannot live together.... We are doomed to choose, and every choice may entail an irreparable loss." In short, it's what Michael Ignatieff summarized as "the tragic nature of choice".

The result of this confusion is that one affirms the essence of justice to be the authority of the legislator; another, the interest of the sovereign; another, present custom, and this is the most sure. Nothing, according to reason alone, is just in itself; all changes with time. CUSTOM CREATES THE WHOLE OF EQUITY, FOR THE SIMPLE REASON THAT IT IS ACCEPTED. IT IS THE MYSTICAL FOUNDATION OF ITS AUTHORITY; WHOEVER CARRIES IT BACK TO FIRST PRINCIPLES DESTROYS IT. NOTHING IS SO FAULTY AS THOSE LAWS WHICH CORRECT FAULTS. He who obeys them because they are just, obeys a justice which is imaginary, and not the essence of law; it is quite self-contained, it is law and nothing more. He who will examine its motive will find it so feeble and so trifling that if he be not accustomed to contemplate the wonders of human imagination, he will marvel that one century has gained for it so much pomp and reverence. The art of opposition and of revolution is to unsettle established customs, sounding them even to their source, to point out their want of authority and justice. We must, it is said, get back to the natural and fundamental laws of the State, which an unjust custom has abolished. It is a game certain to result in the loss of all; nothing will be just on the balance. Yet people readily lend their ear to such arguments. They shake off the yoke as soon as they recognise it; and the great profit by their ruin, and by that of these curious investigators of accepted customs. But from a contrary mistake men sometimes think they can justly do everything which is not without an example. THAT IS WHY THE WISEST OF LEGISLATORS SAID THAT IT WAS NECESSARY TO DECEIVE MEN FOR THEIR OWN GOOD; and another, a good politician, "Cum veritatem qua liberetur ignoret, expedit quod fallatur." Pascal, "Pensees" -
Posted by Thersites at 9:52 AM

Full fathom five thy father lies;
Of his bones are coral made;
Those are pearls that were his eyes;
Nothing of him that doth fade,
But doth suffer a sea-change
Into something rich and strange.
Sea-nymphs hourly ring his knell:
Ding-dong.
Hark! now I hear them — Ding-dong, bell.

Interesting excerpt. I'm not very familiar with Pascal, but now I see why revolutionaries hate him.

It is easier to destroy than to create.

Maybe G.K. Chesterton was inspired by Pascal when he said:

Don't ever take a fence down until you know the reason it was put up.

I think that Pascal might argue not to take the fence down, REGARDLESS of "why" they put it up.