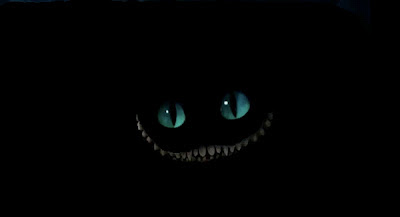 Slavoj Zizek, "How to Read Lacan"

Whenever the membranes of the egg in which the foetus emerges on its way to becoming a new-born are broken, imagine for a moment that something flies off, and that one can do it with an egg as easily as with a man, namely the hommelette, or the lamella. The lamella is something extra-flat, which moves like the amoeba. It is just a little more complicated. But it goes everywhere. And as it is something - I will tell you shortly why - that is related to what the sexed being loses in sexuality, it is, like the amoeba in relation to sexed beings, immortal - because it survives any division, and scissiparous intervention. And it can turn around. Well! This is not very reassuring. But suppose it comes and envelopes your face while you are quietly asleep... I can't see how we would not join battle with a being capable of these properties. But it would not be a very convenient battle. This lamella, this organ, whose characteristic is not to exist, but which is nevertheless an organ - I can give you more details as to its zoological place - is the libido. It is the libido, qua pure life instinct, that is to say, immortal life, irrepressible life, life that has need of no organ, simplified, indestructible life. It is precisely what is subtracted from the living being by virtue of the fact that it is subject to the cycle of sexed reproduction. And it is of this that all the forms of the objet a that can be enumerated are the representatives, the equivalents. [1]

Every word has a weight here, in this deceivingly poetic description of the mythic creature called by Lacan "lamella" (which can vaguely be translated as "manlet," a condensation of "man" and "omelet"). Lacan imagines lamella as a version of what Freud called "partial object": a weird organ which is magically autonomized, surviving without a body whose organ it should have been, like a hand that wonders around alone in early Surrealist films, or like the smile in Alice in Wonderland that persists alone, even when the Cheshire cat's body is no longer present: "'All right', said the Cat; and this time it vanished quite slowly, beginning with the end of the tail, and ending with the grin, which remained some time after the rest of it had gone. 'Well! I've often seen a cat without a grin', thought Alice; 'but a grin without a cat! It's the most curious thing I ever saw in my life!'" The lamella is an entity of pure surface, without the density of a substance, an infinitely plastic object that can not only incessantly change its form, but can even transpose itself from one to another medium: imagine a "something" that is first heard as a shrilling sound, and then pops up as a monstrously distorted body. A lamella is indivisible, indestructible, and immortal - more precisely, undead in the sense this term has in horror fiction: not the sublime spiritual immortality, but the obscene immortality of the "living dead" which, after every annihilation, re-composes themselves and clumsily goes on. As Lacan puts it in his terms, lamella does not exist, it insists: it is unreal, an entity of pure semblance, a multiplicity of appearances which seem to envelop a central void - its status is purely fantasmatic. This blind indestructible insistence of the libido is what Freud called "death drive," and one should bear in mind that "death drive" is, paradoxically, the Freudian name for its very opposite, for the way immortality appears within psychoanalysis: for an uncanny excess of life, for an "undead" urge which persist beyond the (biological) cycle of life and death, of generation and corruption. This is why Freud equates death drive with the so-called "compulsion-to-repeat," an uncanny urge to repeat painful past experiences which seems to outgrow the natural limitations of the organism affected by it and to insist even beyond the organism's death - again, like the living dead in a horror film who just go on. This excess inscribes itself into the human body in the guise of a wound which makes the subject "undead," depriving him of the capacity to die (like the wound on the ill boy's stomach from Kafka's "A Country Doctor"): when this wound is healed, the hero can die in peace.