Rather Death than Shame 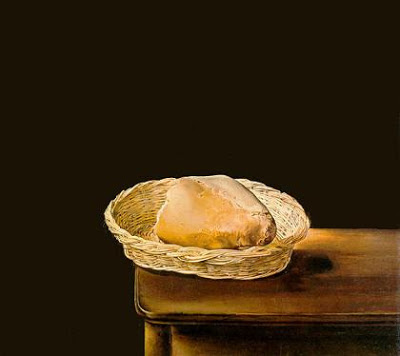 Dalí writes in the Bignou Gallery of New York catalogue that he painted Basket of Bread in two months, when "the most staggering and sensational episodes of contemporary history took place" and finished "one day before the end of the war".

The painting's subtitle "Rather Death than Shame" takes on special significance during this time period. The basket is precariously situated on the edge of the uncovered table, against a starkly black backdrop, an omen to its own sacrificial destruction.

Adolf Hitler, a well-recorded subject by Dalí, chose death rather than the inevitable shame of capture on April 30, 1945. In Dali's essay, "The Conquest of the Irrational" written in 1935, Dali speaks of a "moral hunger" of the modern age that the German people sought relief through Hitler and National Socialism. Dali writes that Hitler’s followers were "systematically cretinized by machinism" and "ideological disorder", to which they "seek in vain to bite into the senile and triumphant softness of the plump, atavistic, tender, militaristic, and territorial back of any Hitlerian nursemaid." Further, this "irrational hunger is placed before a cultural dining table on which are found only ... cold and insubstantial leftovers." Hitler portrayed as the heel of a loaf of bread, on the edge of a precipice, sums up Dali's opinion of Hitler and his ultimate demise.

The painting was also said by Dali to have been painted the week the atomic bombs fell on Japan. "My objective was to arrive at the immobility of the pre-explosive object", Dali reveals. Taken in the context of the Atomic bombings of Hiroshima and Nagasaki, "Rather Death than Shame" could also mean that it's better to have died a victim than bear the shame of having dropped the bombs.

Then Jesus was led by the Spirit into the wilderness to be tempted by the devil. After fasting forty days and forty nights, he was hungry. The tempter came to him and said, “If you are the Son of God, tell these stones to become bread.” Jesus answered, “It is written: ‘Man shall not live on bread alone, but on every word that comes from the mouth of God.'

Jesus, full of the Holy Spirit, left the Jordan and was led by the Spirit into the wilderness, where for forty days he was tempted by the devil. He ate nothing during those days, and at the end of them he was hungry. The devil said to him, “If you are the Son of God, tell this stone to become bread.” Jesus answered, “It is written: ‘Man shall not live on bread alone."


..."Thou wouldst go into the world, and art going with empty hands, with some promise of freedom which men in their simplicity and their natural unruliness cannot even understand, which they fear and dread- for nothing has ever been more insupportable for a man and a human society than freedom. But seest Thou these stones in this parched and barren wilderness? Turn them into bread, and mankind will run after Thee like a flock of sheep, grateful and obedient, though for ever trembling, lest Thou withdraw Thy hand and deny them Thy bread."... 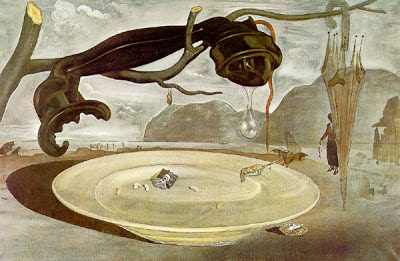