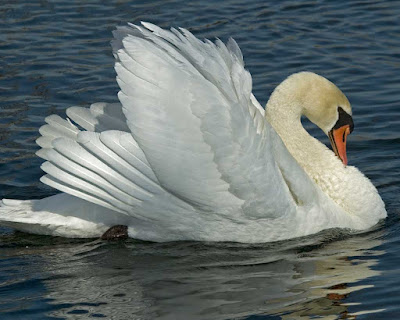 Andromache, I think of you! That false Simois
that narrow stream, meagre and sad, flowing there
where the immense majesty of your widowed grief,
shone out, growing from your tears,
stirred my fertile memory, suddenly,
as I was crossing the new Carrousel.
The old Paris is gone (the shape of a city
changes faster than the human heart can tell)
I can only see those frail booths in the mind’s eye,
those piles of rough-cut pillars, and capitals,
the weeds, the massive greening blocks, that used to lie
water-stained: the bric-a-brac piled in shop windows.
There, there used to be a menagerie:
One dawn, at the hour when labour wakes, there,
under the cold, clear sky, or, when the road-menders set free
a dull hammering, into the silent air,
I saw a swan, that had escaped its cage,
striking the dry stones with webbed feet;
trailing, on hard earth, its white plumage;
in the waterless gutter, opening its beak;
bathing its wings frantically, in the dust,
and crying, its heart full of its native streams:
‘Lightning, when will you strike? Rain when will you gust?’
Unfortunate, strange, fatal symbol, it seems
I see you, still: sometimes, like Ovid’s true
man transformed, his head, on a convulsive neck, strained
towards the sky’s cruel and ironic blue,
addressing the gods with his complaint.

Paris changes! But nothing, in my melancholy,
moves. New hotels, scaffolding, stone blocks,
old suburbs, everything, becomes allegory,
to me: my memories are heavier than rocks.
So, in front of the Louvre, an image oppresses me.
I think of my great swan, with its mad movements,
ridiculous, sublime, as exiles seem,
gnawed by endless longing! And then,
of you, Andromache, fallen from the embrace
of the great hero, vile chattel in the hands of proud Pyrrhus,
in front of an open tomb, in grief’s ecstatic grace,
Hector’s widow, alas, and wife of Helenus!
I think of the negress, consumptive, starved,
dragging through the mire, and searching, eyes fixed,
for the absent palm-trees of Africa, carved
behind the immense walls of mist:
Of those who have lost what they cannot recover,
ever! Ever! Those who drink tears like ours,
and suck on sorrow’s breasts, their wolf-mother!
Of the skinny orphans, withering like flowers!
So in the forest of my heart’s exile,
an old memory sounds its clear encore!
I think of sailors forgotten on some isle,
prisoners, the defeated! ....and of many more!

Note. Andromache was Hector’s wife who mourned his death in the Trojan War. The Simois and the Scamander (Xanthus) were the two rivers of the Trojan Plain. Pyrrhus is Neoptolemus, son of Achilles. Andromache fell to him as a spoil after the fall of Troy. Helenus was a son of Priam and brother of Hector. Baudelaire follows Virgil, The Aeneid III 289, where Aeneas reaches Epirus and Chaonia, and finds Helenus and Andromache. Helenus has succeeded to the throne of Pyrrhus and married Andromache. Aeneas finds Andromache sacrificing to Hector’s ashes in a wood near the city (Buthrotum) by a river named after the Simois. This is Baudelaire’s ‘false Simois’. Andromache explains that Pyrrhus has left her for Hermione, and passed her on to Helenus, who has been accepted as a Greek prince. Helenus has built a second ‘little’ Troy in Chaonia. Andromache is a symbol of fallen exile. The Carrousel is a bridge over the Seine in Paris, recent at the time of the poem. The Ovid reference is (arguably) to Cycnus, son of Sthenelus, changed to a swan, grieving for Phaethon (See Metamorphoses II 367 and also Virgil, Aeneid X 187). The Louvre Palace is now a Museum and Art Gallery, on the right bank of the Seine, in Paris.
Posted by Thersites at 5:31 AM