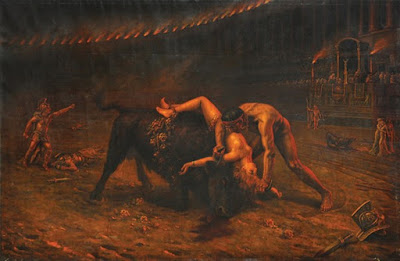 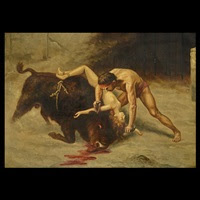 "The Arena Scene from Quo Vadis" (1910) by A. D. M. (Astley David Middleton) Cooper (Californian, 1856-1924)
Originally commissioned by W. J. Ferguson in 1910 for his establishment, New Louvre Saloon (53 North First, San Jose, CA). The painting was featured in the saloon until 1943. Note: The Classical Allegorical subject matter of the painting is based on the rescue of Lygia by Ursus from the back of the Wild Bull during the time of Emperor Nero which eventually led to their freedom as slaves.

Posted by Thersites at 8:47 AM