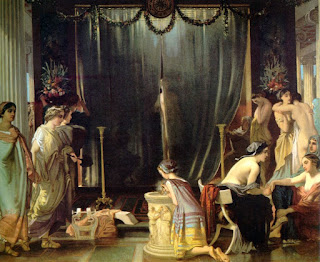 In order to exemplify the structure of such redoubled deception, Lacan evoked the anecdote about the competition between Zeuxis and Parrhasios, two painters from the ancient Greece, about who will paint a more convincing illusion. First, Zeuxis produced such a realistic picture of grapes that birds were lured into picking at it to eat the grape. Next, Parrhasios won by painting on the wall of his room a curtain, so that Zeuxis, when Parrhasios showed him his painting, asked him: “OK, now please pull aside the veil and show me what you painted!” In Zeuxis’s painting, the illusion was so convincing that image was taken for the real thing; in Parrhasios’ painting, the illusion resided in the very notion that what we see in front of us is just a veil covering up the hidden truth. This is also how, for Lacan, feminine masquerade works: she wears a mask to make us react like Zeuxis in front of Parrhasios’ painting – OK, put down the mask and show us what you really are!

Slavoj Zizek, "How to Read Lacan"


In a 1964 seminar, the psychoanalyst and theorist Jacques Lacan observed that the myth reveals an interesting aspect of human cognition: While animals are attracted to superficial appearances, humans are enticed by the idea of that which is hidden.

Much as the sense of "hearing" fearfully "cues" the eyesight and then "searches" visually for the "source" of the disturbing noises heard in the deep dark night...