...and the Limit of a Colour is the Size of the Passage Through which an Effluence must Pass?

SOCRATES: Well, I will try and explain to you what figure is. What do you say to this answer?—Figure is the only thing which always follows colour. Will you be satisfied with it, as I am sure that I should be, if you would let me have a similar definition of virtue?

MENO: But, Socrates, it is such a simple answer.

MENO: Because, according to you, figure is that which always follows colour.

MENO: But if a person were to say that he does not know what colour is, any more than what figure is—what sort of answer would you have given him?

SOCRATES: I should have told him the truth. And if he were a philosopher of the eristic and antagonistic sort, I should say to him: You have my answer, and if I am wrong, your business is to take up the argument and refute me. But if we were friends, and were talking as you and I are now, I should reply in a milder strain and more in the dialectician's vein; that is to say, I should not only speak the truth, but I should make use of premises which the person interrogated would be willing to admit. And this is the way in which I shall endeavour to approach you. You will acknowledge, will you not, that there is such a thing as an end, or termination, or extremity?—all which words I use in the same sense, although I am aware that Prodicus might draw distinctions about them: but still you, I am sure, would speak of a thing as ended or terminated—that is all which I am saying—not anything very difficult.

MENO: Yes, I should; and I believe that I understand your meaning.

SOCRATES: And you would speak of a surface and also of a solid, as for example in geometry.

SOCRATES: Well then, you are now in a condition to understand my definition of figure. I define figure to be that in which the solid ends; or, more concisely, the limit of solid.

MENO: And now, Socrates, what is colour?

SOCRATES: You are outrageous, Meno, in thus plaguing a poor old man to give you an answer, when you will not take the trouble of remembering what is Gorgias' definition of virtue.

MENO: When you have told me what I ask, I will tell you, Socrates.

SOCRATES: A man who was blindfolded has only to hear you talking, and he would know that you are a fair creature and have still many lovers.

MENO: Why do you think so?

SOCRATES: Why, because you always speak in imperatives: like all beauties when they are in their prime, you are tyrannical; and also, as I suspect, you have found out that I have weakness for the fair, and therefore to humour you I must answer.

SOCRATES: Would you like me to answer you after the manner of Gorgias, which is familiar to you?

SOCRATES: Do not he and you and Empedocles say that there are certain effluences of existence?

SOCRATES: And passages into which and through which the effluences pass?

SOCRATES: And there is such a thing as sight?

SOCRATES: And now, as Pindar says, 'read my meaning:'—colour is an effluence of form, commensurate with sight, and palpable to sense. 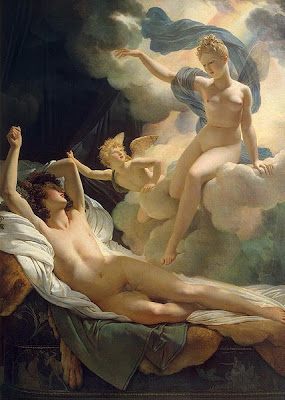 Guerin, "Morpheus & Iris" (1811)
So does virtue also vary according to the size/energetic strength of it's possessor and the angle through which it is viewed? That would certainly explain both the death of Semele and 1 Corinthians 13:12, which contains the phrase βλεπομεν γαρ αρτι δι εσοπτρου εν αινιγματι', which is rendered in the KJV as "For now we see through a glass, darkly."
Posted by Thersites at 9:49 AM