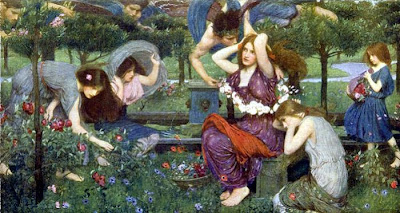 In Roman mythology, Flora was a goddess of flowers and the season of spring. While she was otherwise a relatively minor figure in Roman mythology, being one among several fertility goddesses, her association with the spring gave her particular importance at the coming of springtime. Her festival, the Floralia, was held in April or early May and symbolized the renewal of the cycle of life, marked with dancing, drinking, and flowers. Her Greek equivalent was Chloris. Flora was married to Favonius, the wind god, and her companion was Hercules. Due to her association with plants, her name in modern English also means plant life. Flora achieved more prominence in the neo-pagan revival of Antiquity among Renaissance humanists than she had ever enjoyed in ancient Rome.

Zephyrus, or just Zephyr (Greek:Zéphuros), in Latin Favonius, is the Greek god of the west wind. The gentlest of the winds, Zephyrus is known as the fructifying wind, the messenger of spring. It was thought that Zephyrus lived in a cave in Thrace. Zephyrus was reported as having several wives in different stories. He was said to be the husband of his sister Iris, the goddess of the rainbow. He abducted another of his sisters, the goddess Chloris, and gave her the domain of flowers. With Chloris, he fathered Carpus (fruit). He is said to have vied for Chloris's love with his brother Boreas, eventually winning her devotion. Additionally, with yet another sister and lover, the harpy Podarge (also known as Celaeno), Zephyrus was said to be the father of Balius and Xanthus, Achilles' horses.

One of the surviving myths in which Zephyrus features most prominently is that of Hyacinth. Hyacinth was a very handsome and athletic Spartan prince. Zephyrus fell in love with him and courted him and so did Apollo. The two competed for the boy's love, but he chose Apollo, driving Zephyrus mad with jealousy. Later, catching Apollo and Hyacinth throwing a discus, Zephyrus blew a gust of wind at them, striking the boy in the head with the falling discus. When Hyacinth died, Apollo created the hyacinth flower from his blood.In the story of Cupid and Psyche, Zephyrus served Cupid by transporting Psyche to his cave.

'What it that noise?'
The wind under the door.
'What is that noise now? What is the wind doing?'
Nothing again nothing.